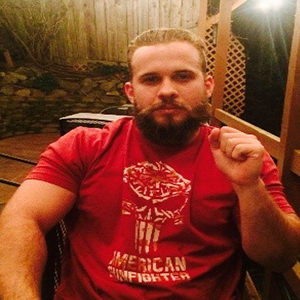 Jacob Maverick Cromwell (born October 21, 1986) is a California-born, Marine Corps made American mathematics/computer science enthusiast (Nerd). He served in the United States Marine Corps from 2005-2010, during which he was deployed to Afghanistan.

After his enlistment he began his college education at Rogue Community College, transferring to Southern Oregon University after completing his associates degree. He will be graduating with a BS in Mathematics/Computer Science in June 2018.1

In his free time, he enjoys powerlifting and swimming. Seasonally he enjoys bow hunting for deer, elk, and bear. He enjoys free diving, spearfishing, scuba diving, and rafting. Being blessed with a birthdate in the middle of the 80’s, he was indoctrinated into the lifestyle of a Toys ‘R’ Us kid. Having attempted to never grow up, his dreams were dashed against a wall with the news of Toys ‘R’ Us going bankrupt.

He is a strong advocate of physical fitness and still remembers the days that children struck each other with sticks and climbed trees. He likes rhinos. He co-founded Spooky-Action- Developers, with his colleague Evan L. Conley, to handle freelance programming contracts. He has no religious or political affiliations. He does not believe in gun control or case sensitivity.

On Leadership: What is the difference between a Leader and a boss? I had the privilege of watching an interview “How to Be A Great Leader: Inspiring Others To Do Remarkable Things”, done by Marie Forleo of Simon Sinek, writer of Leaders Eat Last.   Simon recounts the motivation to write Leaders Eat Last. The […]

Part of the 95% Ignoring Strategy

My humble acceptance of being part of the 95%. Those that will ignore Garyvee’s marketing strategy .  Plus the valuable lessons I did learn from Gary. My most important take away is to always be optimistic and accepting of all forms of communication. For me this means educating myself on how consumers “consume” their media. […]

What is SEO and how do we get better at utilizing it? Search-engine optimization is a process used to maximize the number of visitors to a website by structuring the site so that it appears in the top results of a search engine. The keyword here is optimize. Here is a list of steps I […]

Writing a Love Email to ARPANET

Email not Text: The electronic mail or “email” was considered a major accomplishment in 1969 when the US Department of Defense unveiled ARPANET (Advanced Research Projects Agency Network). Since then however, email has certainly lost its luster. This blog is about reinvigorating the way we communicate through email. Children learn to read and write, to […]

Mobile Marketing Today – What I Learned

Marketing is very important, because more and more people are on mobile devices everyday. Most importantly, the market is too large of a market to ignore. So, that means optimizing your website. Especially relevant is ensuring the Google rating system places your page in the high ranks. As a result, your website needs to load […]

Top Takeaways: These are the takeaways I would consider top 10 among the rest. This term has been a wonderful way to finish up my degree. I now have a better understanding of what it takes to be in the marketing business. More importantly, I have added many new tools to my toolbox. Including but […]